In my writing, I love to toy with the idea of truth and tinker with facts.  Objectivity?  Historical accuracy?  These are things that I, honestly, throw out the window when I write.  They are much less capital-T True to me than the feelings behind things.

I do, however, use wikipedia often when I write.  It’s great fodder.  Often the articles show connections between things that I may not have thought of or give details about things that I didn’t know.  Honestly, I am one of those people who goes to wikipedia not only for my facts, but also for my inspiration.

I have heard many times about the dubiousness of wikipedia’s factual accuracy.  I have even seen articles on wikipedia say things that I am sure were incorrect.  So, I know that people twiddle with the articles.  Wikipedia vandalism is not something that’s a new idea for me.  But I had always thought of it as something playful and silly.  Never before as something subversive.

Some of my (very amazing) friends from university are in the process of making a film about the characters behind wikipedia vandalism.  Their research so far is incredibly interesting.  It touches on themes of objectivity, the control of information, and subversion.  They have started a kickstarter campaign to fund the project, and I, for one, am very excited about seeing it come to fruition.

In support of this project, I would like to start a wikipedia-based prompt.  If you go to the main page of wikipedia, on the left-hand side, there is a ‘Random Article’ button.  Flip through 10-15 random articles and see how many of them you can fit into one piece of writing.  Once you start randomly flipping through random articles, you really get a sense of how much information wikipedia holds.  From tiny towns in Europe to obscure sports participants, I am sure that you will mostly come across things you ordinarily wouldn’t write about.  It should be quite interesting.

Good luck and let me know what you come up with!

“Mythology is not a lie, mythology is poetry, it is metaphorical. It has been well said that mythology is the penultimate truth–penultimate because the ultimate cannot be put into words. It is beyond words… Mythology pitches the mind beyond that rim, to what can be known but not told.” ” – Joseph Campbell

It never fails when I need something to write about to read folklore or mythology.  It’s like instant inspiration for me.  So many of the stories are so rich and yet so bare.  They feel like playgrounds to me.  They beg to be told from different perspectives.  They seem to yearn to have details filled in.  They taunt me with the questions, ‘But what happened after that?’

But this prompt is not about retelling.  This is an exercise in setting.  I will admit that I often do not give the setting of a story enough thought.  Setting changes everything.

Pick a random myth or folktale from the (amazing!) collection at the University of Pittsburgh’s website here.  Some fun things I’ve tried: tales starting with the same letter as my name, a character’s name —   you get the point.  Then spin a globe and pick a random place to set your story.  Or, better yet, use the antipodes map to set your story on the exact opposite side of the globe.  Set the story in modern day to change the setting even more.

I would be super interested in seeing what other people come up with, so if you do this, please share!

Creative Commons love to Tina Bell Vance, from flickr for the photo.  Please check out her work.  It is amazing!

to break free of the shingles

they blind with the light

of a reflected winter sun

and mirror the calm

to be suspended from

the sky the snow

anything but the roof

floating among the snowflakes

As I begin to think about writing as a larger part of my life, I realize that I need to think about it differently.  In the past, I’ve written only when it is bursting out of me.  Only when there is that feeling in my chest that if I don’t put pen to paper I might explode.  Only when I am inspired.

But this seems to happen only on days when the honeysuckle moves just an inch to the right and the sun is at a 40 degree angle to the horizon except on even numbered days when the scent of decay is coming from the northeast.  Or, hardly ever.

In the last month, I’ve been making an (mostly, but not completely successful) attempt to write every day.  I’ve found that if I sit down and force myself to write, if I am actively searching for words and my muse, it shows up.  I don’t need to wait around until I feel like the scene from Alien is going to happen and creativity and words are going to splatter all over the keyboard.  I just need to write.

And yes, we’ve all been there.  There are some days when just showing up to write is incredibly painful. On days like that, this talk by Elizabeth Gilbert is incredibly helpful.  Your role in the creative process is to show up – to put in the work.  If you show up and put in the work and your genius doesn’t show up, that’s your genius’s fault.  You can show up and try again tomorrow.  But if you don’t show up at all…

Well, I will let her tell you.

And yes, it’s another TED Talk, but really, they don’t get old.

As I write this, I am sitting by the rooftop pool overlooking downtown Bangkok.  It strikes me in this moment that even the dense, urban hive of this city feels calm and tranquil on a Sunday morning.  It’s the kind of peaceful that still feels alive with possibility, the kind of gentle breeze that holds secrets of inspiration, the kind of quiet that pulls gratitude from somewhere deep in your chest.  There’s something quite special about Sunday mornings.

This kind of tranquil, introspective mood makes me want to share. And today, I’d like to share something from someone to whom I am quite grateful.  In Blue, from http://makebelieveboutique.com/, who is a fellow manatee-lover (!), nominated me for the Sunshine Award last week. 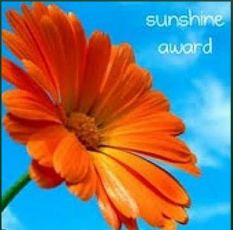 I feel quite honored, seeing as her blog is incredibly soulful and introspective.  Each one of her posts is a tiny morsel of food for thought, that leaves your tongue rolling over the thoughts again and again so that you can grok the fullness of her words.

to fly or not to fly

Attempts to unravel the labyrinthian dynamics of art’s propulsion according to the categories of the reasoning mind will never replace the mystery with an explanation. The phenomenon simply exists. According to Jung, ‘the bird is flown’ when we attempt to explain the mystery….Shaun McNiff

Art Making & the Shadows of Your Work….

little baby feet curled around themselves

the distance felt in a room full of beloved friends, like a dream

opening a book to the perfect poem

cold hands find a warm teacup & the world is perfect

suddenly aware that you’re being & not doing (oh, that’s so rare & good)

In our night-time, there’s always the electricity switched on, we watch ourselves, we get it all in the head, really. You’ve got to lapse out before you can know what sensual reality is, lapse into unknowingness, & give up your volition. You’ve got to learn not-to-be before you can come into being…..D.H. Lawrence

Norea wondered how the scene in front of her looked to the tour group.  A woman framed her mock-surprised face with her hands as she backed away from a set of high-heeled feet dangling lifelessly.  In a circle around the computer screen, 8 orange-striped ten-year-olds in pleather rolly chairs listlessly watched the drama.  Only their Thai teacher seemed enrapt.  In the corner, the teaching assistant scrolled through pictures of cookies shaped like Lady Gaga.  From the window outside, the five professors on Norea’s tour tittered like overexcited hamsters.

“Very… unusual school,” one of them said to her.  Norea nodded.

Norea turned around so that her silvery eyes met the horizon. On the eighth floor, she had an uninterrupted view of the city.  In the distance, the most recognizable bridges in Bangkok batted golden eyes as they coyly skirted behind the smog.  They dropped gray-brown veils onto the vibrating city below as they shimmied in the heat.   The distant downtown towers looked as if they had donned their best khakis and sidled up next to the stage to enjoy the show.   The scene was suspended, a sepia photo with blurred edges and a highlighted blue sky.  All the smiles were frozen.

The wet, climbing ivy that was the Chao Phraya River evaporated inexorably up the sides of skyscrapers, covered the cars parked on bridges, and hid the street vendors, encircling the city in its grasp.

“The children learn by creating,” she told the group, still looking at the hazy sparkle in the distance.  “In this class, they are learning Thai culture and language by studying curses.  In the coming weeks, they will make their own drama about curses.”

The group nodded in unison and Norea guided them downstairs.

“And does it work?” a professor with too-red lipstick and an unmoving-shell of hair asked.

“The sixth floor has science labs and the facilitator’s offices,” Norea said.

Creative Commons love to http://www.flickr.com/photos/mikebehnken/ for the picture!

She could hear his abdomen, even from eight stories above. She knew he waited for her, dressed in new skin holding the bark of a mango tree. For thirteen years, she had dug and hid, dug and hid, a pale pearl of a nymph sheltered in flooding clay. Prematurely buried. She had fed on rootjuice and waited.

And now, the time for burying herself was gone. She no longer wore the tough soil skin of the past. The brightness of being was nearly unbearable. She was green and larger than herself.

She sat exposed, mesmerized by the equatorial sunlight and the scene in front of her. A kaleidescope of rounded, dark-haired girls with lightning eyes and cloud-colored skin. Mirrored and moving the same. The repetition of girls had no expression on their faces. Their mouths moved at the groups of people surrounding them, but their dream-time eyes looked through the scene.

She heard him again, dry-fly ribs rubbing together to blot out the sounds of metropolitan traffic and children. The vibrations called to her.

She looked down at the expectant mango tree and imagined the future she would create. Millions of shimmery nymphs sprinkling from the branches, raining onto the soil below, christening the ground with their sparkling selves.

There was nothing for her to do now, except let go.

Creative Commons love to http://www.flickr.com/photos/rogersmith/ for the photo! Thanks!